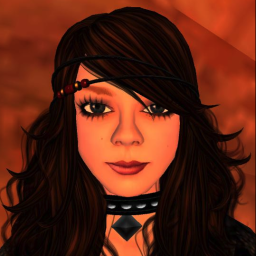 When they offer you a blue ring or a red ring, you should always ask for a green one. ;)

About how Mymble discovers that she is missing something and then finds it.

Mymble cast a quick glance in her pocket mirror, before leaving her elegant and well planned cottage, heading for the Moomin Valley. She didn’t really need to check that her bun was done correctly, she was convinced it was. Her shiny dark hair glittered in the sunlight. Confirming that everything was perfect – her hair, her ribbon, her dress – had just become a habit to her. Yes, indeed, everything was exactly as she liked it. Or was it, really? Lately, Mymble had begun to feel a gnawing sense of something missing in her life. Her contacts with that bohemian, petit bourgouis, but above all, un-mymbly Moomin family, had made her question her well-planned and practical life. What was missing, she didn’t really know. If she wanted things to be unplanned, she could always spend a few days with Moomintroll and his irritating friends and his mother and father. Her little sister My enjoyed living with them, but surely that was only because nothing could get to her. Their Moomin-ness creeps out their ears, she would to say.

Mymble smiled when she thought of her little sister, who was one of the few she really cared about. She shook her head and wrinkled her nose. She did like others, of course she did, but soon she had dismissed the thought. Mymble was enjoying the sunshine and the relative silence. Soon the noisy collection of Troll sounds would be filling her sensitive ears. She really didn’t know why she kept going back to the valley. Of course she wanted to see My, her headstrong and forceful little sister. Her train of thought was broken when she caught sight of an old acquaintance wandering around on the path before her. Before she knew what she was doing, she had responded to Fillyjonk’s warm and welcoming smile. Mymble felt confused and surprised, which was completely uncharacteristic of her. Fillyjonk seemed genuinely pleased to see her, and that filled Mymble with a strange and unaccustomed feeling. Could it be joy?

”Dear Mymble, how nice to see you”, said Fillyjonk, her nose trembling a little and her eyes wandering. ”I mean, oh, dear -” She broke off and Mymble never found out what she was referring to.

”Fillyjonk”, Mymble replied simply and for the first time in her life, felt at a loss for words.

Fillyjonk hurried after her and was considering what Mymble might have meant by what she said, but her statement had been accompanied by a smile, and that warmed her.

When they got closer to the garden in the valley, their ears were filled with a loud scream.

”You batty old scarecrow”, came from closer to the ground.

”Oh, dear me”, Fillyjonk cried. Her cheeks were flushed.

”My! You will let my legs go or I’ll bite your tail off.”

Mymble knew how to handle her little sister. She lifted the child off the ground and whirled her around, both laughing so hard they were crying.

”Oh, dear”, Fillyjonk said at a near whisper and her cheeks took on a purplish red shade, when she realized that she wasn’t the old scarecrow.

My smiled at Fillyjonk, but somehow she made her smile look like a growl.

”Don’t look so glum, you old bat”, said My. When she was set down on the ground, she pulled Fillyjonk’s tail in passing.

”Come on, we have to hurry. Moominmamma is serving us cordial on the veranda. Soon the fat troll will have eaten all the buns.”

Before they even had time to blink, My was already on the veranda and Mymble could see from where she was standing, that Moominmamma had grabbed the dish with the buns and held it beyond the reach of My’s paws. Around Moominmamma’s legs, My was jumping as high as she could.

Fillyjonk and Mymble hurried after her. There was nothing as lovely as Moominmamma’s cordial and buns, of that they were both convinced.

”Dear Mymble, dear Fillyjonk. Come and sit down in the shade. The buns are still warm. How nice to have guests”, she added, almost to herself.

”Buns are tasty”, Sniff yelled, reaching out with his paw to grab as many buns as he could.

Moominmamma, who was used to her son’s friends, skillfully moved the dishes out of reach of him and pressed one bun each into Sniff’s and the Moomin Troll’s paws.

Moominmamma held out the dish to Fillyjonk who snorted at Sniff while she nodded pensively at Moominmamma. It wasn’t an altogether easy task, considering that in addition she was balancing a glass in one paw, while picking up a cinnamon bun with the other.

”Thanks, Moominmamma”, she said in a voice that was as steady as she could make it.

The scream echoed through the air.

”Oh, sorry, My, of course you should have one too. Here you go.”

She placed the dish within My’s reach, so she could get a bun too.

Mymble pinched My’s ear and took two buns from the dish. She thanked Moominmamma and handed over one of the buns to My and kept one for herself.

The day passed slowly, with pleasant little highlights, such as visits to the beach, hide and seek and a treasure hunt in the garden. By evening, Mymble was a little tired of the chatter that lay like a lid over the valley. At the same time, she began to feel that a bit of food might be nice. Before she had time to mention anything about that, her little sister began to jump up and down.

”When can you get something to eat in this sorry place? Moominmamma? What are you serving today?”

She turned to Fillyjonk and added:

”Listen, piss ant”, which by My’s standards was pretty nice,”you could make yourself useful too, you know.”

Fillyjonk, who was used to My and was actually longing to be allowed to help Moominmamma out in the pleasant kitchen, ignored the piss ant part of the child’s statement. She turned to Moominmamma, with a hopeful look on her face, and Moominmamma didn’t disappoint her.

”Dear Fillyjonk, do you think you could help me set the table? I think we’ll have dinner in the salon today.”

Before Mymble knew it, Moominpappa, his son, Sniff and My had vanished into the garden to repair the swing that was hanging from a branch in the old apple tree. She was enjoying the sudden silence and was beginning to wonder what she would get up to while she was waiting for supper. She decided to go down to the river where her half brother Snufkin would camp when he was visiting the Moomin Valley. She really couldn’t believe that they were related, considering how different they were, but despite all that, she liked him. The spot where he had chosen to make camp was, admittedly, the most beautiful one in the entire Moomin Valley. Not nearly as practical as her own house, but nice in many different ways.

When she got closer, she noticed, with surprise, that someone had made camp, right there at the bend of the river where Snufkin usually placed his tent.

Mymble felt how – completely without reason – her cheeks began to heat up. She wrinkled her nose. How could this Woodkin make her so embarrassed? For the first time in her life, she had difficulty getting the words out.

”Oh, this isn’t my valley. A Moomin family lives her and they adore having guests.”

”I’ll just make some supper and then I’ll leave at dawn”, Woodkin told her. ”Perhaps you’d like to stay here and have supper with me, miss.”

He cast a quick glance into his satchel that would be all his luggage, Mymble thought.

”I just have a few biscuits left, but I’ve put the kettle on and it’s a beautiful evening.”

Mymble simply didn’t want to let this Woodkin leave. Why she didn’t know, but somehow he made her feel great.

”Why don’t you come up with me to the family? I’m sure they’ll invite you in for something really tasty”, she said, trying to sound a little like Fillyjonk. Even though she was flustered and confused all the time, she was constantly considering the needs of others. Mymble caught herself feeling a little envious of Fillyjonk. She was almost as good as Moominmamma at making things cosy. With rapt attention, Mymble awaited Woodkin’s answer.

There wasn’t one, other than the fact that he got up and followed Mymble up to the house. The smell of food felt inviting and they followed the sound of chatter into the house. When the entered the salon everyone turned to them, inquiringly. Moominmamma was the first to speak up.

”I’ll set out another plate. Come, come, please have a seat.”

”This is my friend Woodkin. He’ll be eating with us and then -” she hesitated – then perhaps Moominmamma could make up the blue guest room.

Mymble realized that Woodkin was someone who would be changing her and her life. For some reason, she didn’t feel as if anything was missing from her life anymore.